Official farewell for Zenith at The Dutch Masters 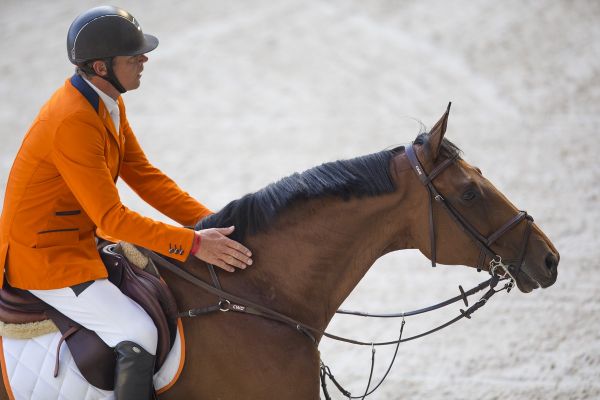 Zenith SFN of Jeroen Dubbeldam will officially say farewell to the public on Sunday afternoon, 17 March, in the Brabanthallen during The Dutch Masters. It will be the last time that the KWPN gelding can be seen at big international event. There will be a special ceremony where we look back on his fabulous career together with all who played a role in it.

“Zenith has won almost everything one can win at the highest level,” says Jeroen. “Somehow things didn’t work out anymore. Last year in Samorin I had a really good feeling in the Grand Prix. I thought we would have a clear round, but we had two faults. That was a big disappointment. I could always trust my feeling. At that moment I knew it had been enough. I left the arena and said to my pupil Daniel Coyle, ‘the party is over’, and Daniel answered ‘but it was a good one’. I felt this was the beginning of the end. I do not want to end at a lower level, he does not deserve that.”

Zenith was born in 2004 and bred by Herman Voort in Den Ham, The Netherlands. In 2011 he was purchased by SFN (Springpaarden Fonds Nederland) and Willy van der Ham is co-owner.

Henk Rottinghuis, Chairman executive board Springpaarden Fonds Nederland: “Jeroen could not have had this great victory march without the support of our certificate holders. We intensely enjoyed all of what this top class rider did with this horse for the Dutch sport. We hope that Jeroen and Zenith SFN will have a great time in the future.”

The farewell of the tall bay gelding will be staged before the start of the Rolex Grand Prix (3.30 pm).