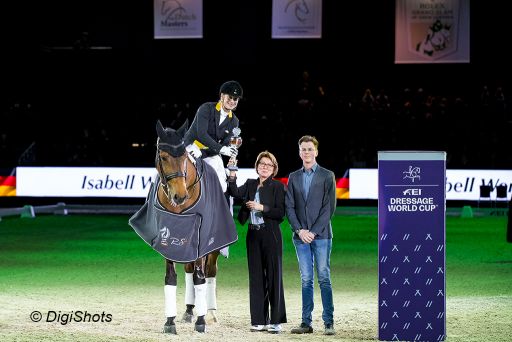 Germany’s dressage queen Isabell Werth repeated her victory of last year in the FEI Dressage World CupTM presented by RS2 Dressage Grand Prix with Emilio. The pair was awarded 77.19% for their test. Werth is unbeaten in this world cup season and top favourite for the world cup title. Runners-up were Denmark’s Daniel Bachmann Andersen and Blue Hors Zack with 76.109%. Third and fourth place went to German combinations: Benjamin Werndl with Daily Mirror (75.739%) and Helen Langehanenberg with Damsey FRH (75.370%). Langehanenberg is the current leader of the World Cup standings.

Best Dutch was Hans Peter Minderhoud with Glock’s Dream Boy NOP. The rider from Oosterbeek received 75.02% with his Vivaldi-son.

‘s-Hertogenbosch is the last qualification before the World Cup Final in Gothenburg. It is the last chance for the riders to gain some more points for a ticket to the final. Minderhoud is quite sure to travel to Gothenburg, but it did not stop him to ride a solid and strong test with his black stallion.