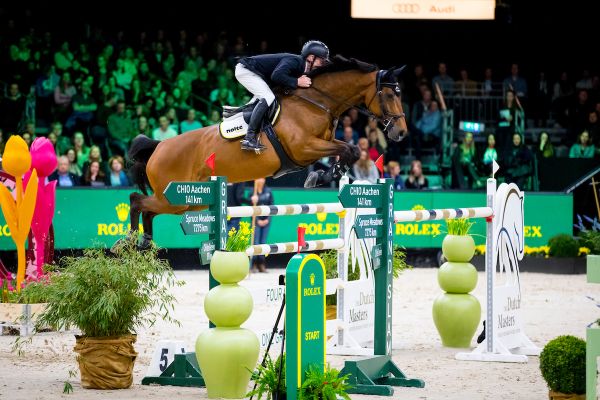 The Dutch Masters will welcome the world’s top riders. No less than 20 out of the top 25 of the World Rankings for jumping riders will come to the Brabanthallen to take their chance on winning, among others, the prestigious Rolex Grand Prix.

Olympic, European and World champions
The current numbers 1, 2 and 3 had already confirmed their participation: Olympic champion (London 2012) and threefold world cup winner, Steve Guerdat, the reigning European champion and winner of the Rolex Grand Prix of Geneva, Martin Fuchs and the 2015 Rolex Grand Prix winner at The Dutch Masters (TDM), Daniel Deusser. The world’s number 5, Pieter Devos will come together with his compatriots Jos Verlooy (14), bronze medal winner at the EC 2019, Niels Bruynseels (19), winner of the 2018 Rolex Grand Prix at TDM, Olivier Philippaerts (28), Gregory Wathelet (33) and Nicolas Philippaerts (44). The 2017 European Champion and number 6 of the world, Sweden’s Peder Fredricson will compete as well as last year’s Rolex Grand Prix winner in ‘s-Hertogenbosch, Henrik von Eckermann (10).
In addition to Daniel Deusser, Germany will be represented by Christian Ahlmann (9) and Marcus Ehning (18), who won the Rolex Grand Prix at TDM in 2016.
The USA’s Kent Farrington (11) will take another chance this year. He could not continue his Rolex Grand Slam cycle in ‘s-Hertogenbosch due to a broken leg in 2018. This year he is up to a new challenge. After winning the Rolex Grand Prix in Aachen, he can still win an extra bonus of € 250,000 for winning two majors in the cycle of four.
British Scott Brash, the only rider to date to win the Rolex Grand Slam title (2015), will compete at TDM as well as Brazilian Marlon Modolo Zanotelli and French top riders Kevin Staut (winner of TDM’s Rolex Grand Prix in 2014) and Julien Epaillard.

Tough opposition by the Dutch
There will be tough opposition from the home riders who will certainly try to make it a Dutch win: Harrie Smolders, the world’s number 13 and Rider of the Year 2018 and 2019, Maikel van der Vleuten (15), whose top ride Verdi TN will say farewell to the public at TDM, Marc Houtzager (29), Piet Raijmakers Jr, Leopold van Asten, winner of the Rolex Grand Prix in 2017 and former Olympic, European and world champion Jeroen Dubbeldam.

The full line-up is published here.