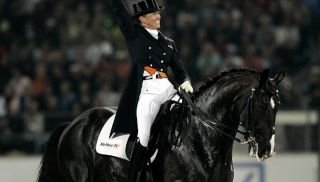 Dressage legend Salinero will have his farewell during Indoor Brabant which will be held from 14 till 17 March in the Brabanthallen in ‘s-Hertogenbosch. The famous pianist Wibi Soerjadi will be present during the farewell show on Thursday evening and on Saturday afternoon to accompany Salinero. Soerjadi composed among others the music for Salinero and Anky’s freestyle “Dance of Devotion” which had its debut on 18 December 2007 in London and with which the pair won the World Cup Final and the gold Olympic medal in 2008.

Thursday evening will offer an extensive programm which starts at 7 pm. During this evening different aspects of the carreer of Salinero/Anky will pass the stage. Anky’s eternal rival Isabell Werth will perform a show together with Salinero and Anky. Also Anky’s pupils will be part of the programm and Anky will also perform in one of her other favourite disciplines, reining. In conclusion Salinero and Anky will ride their Freestyle with live music by Wibi Soerjadi.

On Saturday afternoon they will ride this Freestyle for the very last time, also with live music by Soerjadi, immediately after the FEI Reem Acra World Cup Dressage Freestyle.