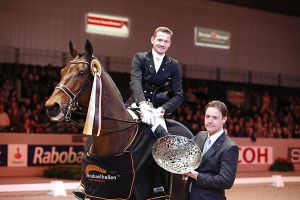 Edward Gal and Interfloor Next One (by Jazz) won the CDI4* Grand Prix/Brabanthallen Prize on Thursday evening. The KNHS Indoor Big Tour Champions received a score of 72.57 per cent for their test. Runners-up were Danielle Heijkoop and Siro (by Gribaldi) with 71.53 per cent.

Sweden’s Juliette Ramel and Ten Points (by Chapman) finished in third with 69.93 per cent, followed by Hans Peter Minderhoud and the Oldenburger stallion Lord of Loxley (by Lord Sinclair) in fourth place with 69.68 per cent. Two other Dutch dressage riders followed in fifth and sixth place: Madeleine Witte-Vrees with Blom’s Wynton (69.48) and Laurens van Lieren with Ulysses La Haya (69.29).