Neck and neck race between Adelinde and Edward 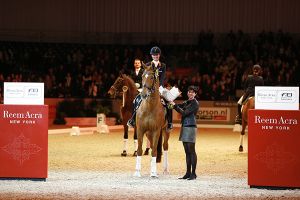 After Edward Gal and Adelinde Cornelissen finished their Grand Prix test for the Reem Acra FEI World Cup Dressage it was hard to determine the winner of this competition. Finally three judges placed Cornelissen and Jerich Parzival first and two judges in the runner-up position. Gal and Glock’s Undercover the placing was the other way around, which gave Adelinde the victory.

President of the jury, Adriaan Hamoen, placed Gal ahead of Cornelissen. “I awarded Gal’s first passage with a nine and his first piaffe with a ten. His transitions were precise and the whole performance showed control. There was hardly any tension and Undercover showed lightness and ease. For me the test was a showcase of perfection, especially from my position at C.” Edward himself was very satisfied with his ride and is confident for tomorrows Freestyle.

Hamoen was very positive on Adelinde’s test. “Their first passage and piaffe were very good too and the whole test was very constant. There was a bit of tension now and then.” Adelinde was not completely satisfied. “Some elements like the series were really good, but other elements, like my first pirouette could have been better. At home he moves with more courage and power which makes his passage and piaffe more expressive.

Tomorrow Adelinde will ride her new Kür, ‘Tribute to my Red Knight’ and she will go for it. “I will not go for a safe ride. My new Kür is a exciting from the beginning to the end and will generate much emotion.”