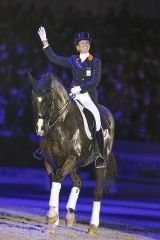 Emotions ran high in the Brabanthallen when the official retirement ceremony for Anky van Grunsven’s 19 year old Hannoverian, Salinero, took place. The Dutch rider enjoyed enormous success with this horse whose career might well have been overshadowed by the memory of his revered predecessor,

Bonfire who, together with van Grunsven, first brought Freestyle Dressage to centre stage. Salinero however followed faithfully in those very famous hoofprints to become a star in his own right, taking Olympic individual gold in Athens in 2004 and again at the equestrian events of the Beijing Olympic Games in Hong Kong four years later. And he helped van Grunsven to become the most prolific winner of the FEI World Cup™ Dressage title – she won it nine times over a 13-year period between 1995 and 2008.

Salinero first came to prominence in 2003 with victory in the Dutch National Championship and was part of the Dutch bronze medal winning team at the London 2012 Olympic Games at Greenwich Park last summer which brought his spectacular career to a fitting conclusion.