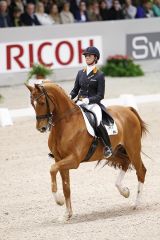 Defending double-champions, Adelinde Cornelissen and Jerich Parzival, won the last leg of the Reem Acra FEI World Cup™ Dressage Western European League 2012/2013 on home ground at the Brabanthallen in ‘s-Hertogenbosch, The Netherlands this afternoon. But Dutch colleague, Edward Gal, put them under intense pressure with a brilliant performance from Glock’s Undercover that brought the crowd to their feet.

Yesterday Gal and the 12-year-old gelding were 1.362 percentage points off Cornelissen’s winning score in the Grand Prix. But the judges saw an even closer margin today, with just 0.8 separating the two. Things could now hardly be more exciting ahead of next month’s Reem Acra FEI World Cup™ Dressage Final in Gothenburg, Sweden, as Gal is quickly closing in on his team-mate with increasingly impressive performances, while Germany’s Helen Langehanenberg and Damon Hill have already proven that they are a force to be reckoned with in the battle for the prestigious title.

With another nice test from Don Johnson FRH, Germany’s Isabell Werth slotted into third ahead of Denmark’s Anna Kasprzak and the expressive Donnperignon while Sweden’s Patrik Kittel and Watermill Scandic claimed fifth place. There was a big buzz in the aftermath of the competition, and while it was Cornelissen who stood top of the prize-giving line, the electricity was all emanating from Gal whose enormous grin said it all.

Today marked a turning point for his lovely black horse who bears more than a passing resemblance to the great stallion, Totilas, which carried him through one of the most exciting periods in the history of this sport as they set new standards until parting company after winning the FEI European Championship in 2009. Together they changed the face of international Dressage, and Gal admitted this evening, in almost a whisper, “it’s not just because he’s a black horse, it’s about the feeling ….riding a horse that doesn’t want to stop and wants to give everything and more….today was a little bit like the same Wow feeling I got with Totilas back then!” he said.

From the outset this last qualifier was full of quality, with Switzerland’s Marcela Krinke Susmelj showing exactly why she was lying sixth on the Western European League rankings coming into this leg of the series as she produced a lovely opening test from Smeyers Molberg that oozed softness and harmony. And their score of 73.850 held the lead until surpassed, first by Sidsel Johansen and Schianto who notched up 74.950 and then by fellow-Dane Anna Kasprzak who really raised the game just before the half-way break with a mark of 78.650 for Donnperignon.

Not even the near-perfection of the passage and piaffe produced by Sweden’s Patrik Kittel and Watermill Scandic could oust this Danish pair who remained in front until Cornelissen took her turn with four left to go. And despite the fact that the title-defenders are still feeling their way into a whole new floor-plan and musical score, they forged way ahead when putting 85.900 on the board.

Germany’s Isabell Werth powered into the arena as the penultimate competitor and posted 79.475 to slot into runner-up spot with Don Johnson FRH, but that wouldn’t last long. Because Gal and Glock’s Undercover kept the crowd spellbound with a last-to-go test that clearly has room for improvement but which had that distinct whiff of a little bit of magic. The spectators couldn’t contain themselves when he left the ring, spontaneously rising to their feet to roar their approval, and when the judges marks were displayed there was an intake of breath, because Gal’s score was so very close to overtaking their other great favourite. The Dutch are spoiled for choice once again.