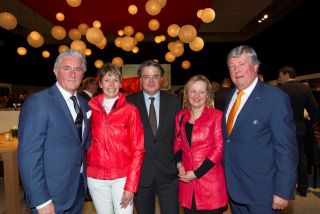 During the closing press conference of the 2013 edition of Indoor Brabant the show president Gerrit-Jan Swinkels had a surprising announcement. “The organizing committee of Indoor Brabant is very proud to announce that Anky van Grunsven will attend the next meeting of the Indoor Brabant committee as a committee member. Anky recently indicated that, besides her sportive ambitions, she now has more time for fun things and that she considers being a member of our committee as such.

“In the past years Anky van Grunsven’s performances in the arena contributed enormously to the popularity of equestrian sport in general and of Indoor Brabant in particular. She always reckoned Indoor Brabant as her home show. The committee is convinced that Anky van Grunsven will contribute to the further development of this event,” according to Swinkels. He continued by saying that this year’s edition again was very successful with 64,000 to 65,000 spectators. “Several days the show was sold out and we celebrated many Dutch victories among the strong international competitor field in both disciplines with Adelinde Cornelissen, Harrie Smolders and Maikel van der Vleuten. Indoor Brabant proved again to be the perfect event where topsport, emotion and atmosphere come together to maintain a good relationship with the thousands of loyal visitors.”