Wonderful Will takes everyone by surprise 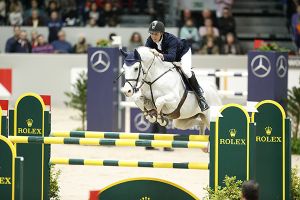 When David Will wakes up on the morning of his 25th birthday next Thursday, he may still be scratching his head about what happened in ‘s-Hertogenbosch this afternoon. Although he is well-known on his national circuit in Germany, and contributed to his country’s victories in the FEI Nations Cup™ at Linz, Austria in 2011 and at Wellington, Florida last year, not even he could have expected to leave the elite of the sport floundering in his wake as he galloped to victory in the last qualifying leg of the Rolex FEI World Cup™ Jumping 2012/2013 Western European League series today.

Following a nonchalant first-round performance he went through to the nine-horse jump-off in which he crushed his considerably more-experienced opponents with another superb cruise around the track. He has just one top horse, the grey stallion Colorit which owner Klaus Isaak has entrusted to him for the past year, but this bright new star rider has broken into the big league after today’s result which left Australia’s Edwina Tops-Alexander and the brilliant Itot du Chateau having to settle for runner-up spot while three-time Rolex FEI World Cup™ Jumping champion, Germany’s Marcus Ehning, finished third with Copin van de Broy.

Ehning remarked afterwards that he wasn’t entirely taken aback by Wills’ winning performance. “I know David, he is a very fast rider and he has beaten me already a few times, so this is not the first!” he insisted. Will couldn’t hide his delight however, hardly daring to believe in what he had achieved. His expression of pure amazement as, one by one, his former superiors all fell short of his extraordinary target-time in the jump-off said it all. “I wasn’t sure I was going to win until the very end” said the rider whose career now looks set on a whole new trajectory.

Ehning describing the first-round course set by Dutchman Louis Konickx as “very clever”. He said “it was really fair, with great distances, but horses had to be really under control, and the last fence was a bit of a joker”. It was no laughing matter for the two who made it all the way there only to put it on the floor however – Finland’s Maiju Mallat with Urleven van de Helle and reigning FEI European Champion Rolf-Goran Bengtsson from Sweden with Quintero la Silla who both seemed destined to make the cut into the timed round.

Konickx set them questions from outset, with the snaking line from the triple bar at three to the vertical at four and the oxer at five requiring a good eye and absolute accuracy. This was followed by a right-hand sweep to the narrow FEI vertical at six which was followed on four easy strides by the triple combination with a tight inside distance between the first two elements and a much longer stretch to the oxer on the way out. There was little time to prepare for the oxer at nine following the vertical at eight, and fence 10 hit the floor regularly as balance on approach became an issue. The double at fence eleven came up quickly off the following left-hand turn and the long five strides to the penultimate oxer at 12 was the undoing of many. But the bogey final vertical was always going to prove problematic, located just past the entrance to the arena and curving away at an uninviting angle. Time and again horses hung back on the approach and didn’t have enough jump left to clear it. Germany’s Ludger Beerbaum and his promising nine-year-old, Zinedine, however were foot-perfect all the way only to fall foul of the 71 seconds time-allowed to pick up a single penalty and this proved good enough for tenth place in the final analysis.