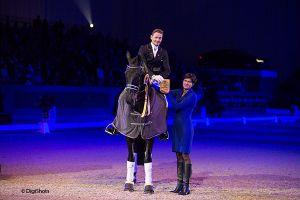 Edward Gal showed much control in the ring. However, the test had a few little mistakes. “Before I had to temper Undercover’s will to go forward, but now I can let him go a bit more. This goes perfect when training at home, but now it has to become consistant in the test as well. We therefore still have some little mistakes, but I hope to improve in the next few months.”

Valentina Truppa and Fixdesign Eremo del Castegno performed a very controlled test, but had some mistakes in the one tempi.

Kingsley Siro’s test showed some tension. Daniëlle Heijkoop: “My horse stabled near two stallions who are very busy with each other. Siro was therefore very tense when I saddled him. I was not able to get rid of the tension during the warm-up.”