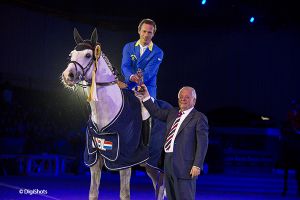 The first international jumping class was an all Dutch affair, but things turned in the VDL Groep Prize. In this class it were the German riders who took the top honours. Half way the competition Christian Ahlmann set the time on 63.58 with Aragon Z (by Askari) and after that no other combination could better their time. Closest was compatriot Hans-Dieter Dreher with Embassy II (by Escudo I) in 64.33 followed by Marco Kutscher with Cornet’s Cristallo (by Cornet Obolensky) in 64.63. Best Dutch riders was VDL’s stable rider Leopold van Asten with VDL Groep Quinthago Z (by Quinar Z) in 11th place.e