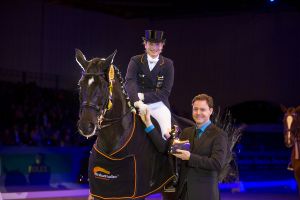 The top five of the Brabanthallen Prize, the CDI4* Grand Prix freestyle was quite similar to the result of the Grand Prix of Friday morning. Winner Isabell Werth showed some surprising elements in her Freestyle which, for a minute, fooled the public. From piaffe she went straight into a pirouette and changed again to a pirouette in gallop. It looked as if it happened by accident but it was not. The test had a high level op difficulty and was awarded with 76.125%.