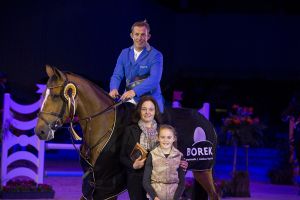 Indoor Brabant Rider of the Year Gerco Schröder was by far the fastest in the Borek Prize with the NRPS mare Zamora (by Quasimodo). The combination finished in 59.72 seconds. Runner-up was the reigning Olympic Champion Steve Guerdat from Switzerland. He stopped the time in 62.20 with his eight-year-old Swiss-bred mare Catalina CH (by Conterno Grande). Ireland’s Denis Lynch, winner of the Indoor Brabant Grand Prix in 2011, finished in third with the 10-year-old mare Coulisa (by Couleur-Rubin).

Photo: Gerco Schröder with Mrs Inge Bogaers and her daughter Floor of Borek