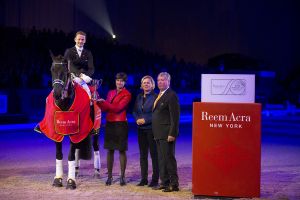 Dutch riders claimed five of the top seven places at the last qualifying leg of the Reem Acra FEI World Cup™ Dressage 2013/2014 Western European League series at ‘s-Hertogenbosch, The Netherlands today where the winner, Edward Gal, was in a league all of his own.
Riding Glock’s Undercover the 44-year-old Dutchman produced a fabulous test but for a mis-step in extended trot.  Discussing it afterwards he pointed out “at this level of the sport you cannot afford any mistake at all - not even a tiny one”.  But his score of 86.700 would leave him a massive seven points clear of runner-up Danielle Heijkoop (Kingsley Siro) who is looking very comfortable in top-class company these days.  Third place went to Italy’s Valentina Truppa (Fixdesign Eremo del Castegno) while Germany’s Isabell Werth (El Santo NRW) slotted into fourth.

There was a strong home-side representation with Dutch riders filling nine of the 15 starting places, and each and every one of them made it count.  The rapid development of a whole new generation of both horses and riders makes this a very exciting time for Dutch Dressage, and the experience and confidence gained through participation in the pilot FEI Nations Cup™ Dressage series was very much in evidence today.
Tommie Visser, a member of the team that won the opening leg of the 2014 FEI Nations Cup™ Dressage series at Vidauban, France three weeks ago was leading the field at the half-way stage following a brilliant ride with Vingino.  The big black gelding has tremendous presence and their cool, calm way of working together was a joy to watch.  The only moment Visser looked under any real pressure was when he asked his powerhouse of a horse to come back from extended canter, but their piaffe was near-perfect and despite a little mistake before their first canter pirouette they racked up a mark of 74.950 as the first-half target score.
Visser’s decision to put his TV presenting career on the back-burner in order to concentrate on Dressage looks to be seriously paying off and based on recent results, it is no surprise that the rider who will turn 30 next month has been promoted to the Dutch Olympic A team.

Fellow-Dutchman Hans Peter Minderhoud threw down a new target when second to go after the break.  Riding the 12-year-old stallion, Johnson, he was awarded 77.975 for a test that demonstrated all the trademark skill of this hugely experienced horseman.  Minderhoud’s ability to transition from really forward extended canter to a pirouette was just one example of his polished performance with this ever improving horse.
His lead was short-lived however as Isabell Werth threw down one of those brave and brilliant rides that have kept her at the centre of the sport for decades and which keep everyone on the edges of their seats.  The German rider marched into action from the outset with El Santo NRW to put together a floor-plan that showed pace, timing, rhythm, accuracy and a strong degree of difficulty, and the bay gelding’s co-owner, Madeleine Winter-Schulze, and German Dressage team trainer Monica Theordorescu had smiles almost as wide as Werth’s as she left the arena to go out in front on a score of 78.575.
But Gal put the whole competition into a different context as he pumped out amazing passage and piaffe with the impressive gelding Glock’s Undercover.  At the London International Horse Show at Olympia last December, Gal produced his best result with this horse when posting 87.425, and today he was only a little short of that when awarded 86.700.  It was highly unlikely anyone else could do better, and the audience of 8,500 spectators rose to their feet to give their hero a standing ovation as he left the arena.

Italy’s Valentina Truppa pushed Werth down the line when taking temporary runner-up spot for one of her typically entertaining tests with Fixdesign Eremo del Castegno.  The fearless rider included one-handed one-tempi changes and even one-handed pirouette as she executed her floorplan to her Italian-themed musical accompaniment for a score of 79.475. But the Dutch weren’t finished yet.
Last in was the young lady who slotted in behind Gal on the night that Olympic champions Charlotte Dujardin and Valegro stormed to a new world-record Freestyle score on home soil at Olympia in London last December.  Danielle Heijkoop was still only a relative rookie to the top end of the sport when brought into the Dutch team for last summer’s ECCO FEI European Championships in Denmark where she helped her country to silver medal position, but the 27-year-old has been a winner all her life with Junior and Young Rider gold medals amongst her incredible winning haul so far.
Her horse, the 15-year-old Kingsley Siro, showed huge quality of movement, flicking his toes in extended trot and producing the loveliest piaffe and passage.  When the Ground Jury’s score of 79.650 rocketed her into second place it was the ideal end to a great day for the home crowd.