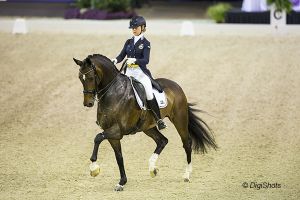 The CDI4*Grand Prix, the Brabanthallen Prize, was won by the Swedish dressage rider Juliette Ramel and her 10-year-old KWPN stallion Buriel K.H. The combination received 73.940% for their test. Juliette, who lives in Aachen, Germany, is trained by Nicole Werner. Buriel K.H. showed some very good passage moments and also his gallop was of a high quality.

The European bronze medalist of 2015, Spanish Beatrice Ferrer-Salat finished in second place with the 11-year-old Westphalian gelding Sir Radjah with 72.020%. Beatrice, who celebrates her birthday today, received high scores for the extended trot and flying changes.

Third place was for Diederik van Silfhout with the KWPN gelding Bonzanjo. The combination scored 71.320% and scored high with their half passes and pirouettes.

The same combinations will have the Grand Prix Freestyle, the Borek Prize, tomorrow at 11.30 hrs.