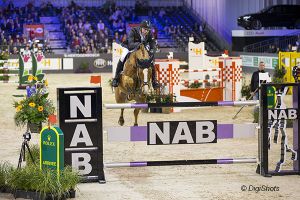 On Friday afternoon, Jur Vrieling, member of the Dutch team that won gold at the European and World Championships, won the first international jumping class with his 11-year-old KWPN stallion Arezzo VDL. He finished the Two Phases competition in 25.26 seconds. This was just a little faster than the round of Germany’s Hans-Dieter Dreher. Dreher, who won the Grand Prix of Maastricht in November last year, finished in 26.08 seconds with Callisto, a Holsteiner gelding by Casall. Third place went to Italy’s Emanuele Gaudiano with Carlotta 232 who stopped the clock at 26.21.