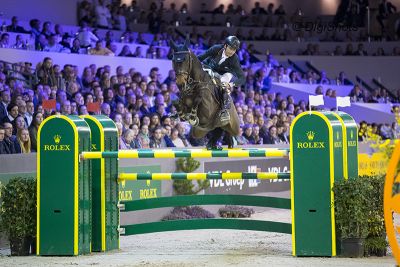 In one of the most dramatic Grand Prix in Indoor Brabant's long history, Leopold van Asten riding VDL Groep Zidane N.O.P. today won the Rolex Grand Prix. Established in 1967, and celebrating its 50th anniversary this year, this leading show has a long history of attracting the very best riders, and with 12 of the World’s Top 20 taking part, 2017 proved to be a sporting classic which resulted in Dutch riders also taking second and third place.

The top Grand Prix in the world demand the very highest levels of skill and precision from the riders, and course designer Louis Konickx laid out a technical and challenging first round course which many found difficult to master. Despite the support of the passionate crowd willing each rider to go clear, it was not until the 24th horse and rider combination to enter the ring, home favourite Wout-Jan van der Schans riding Capetown, that they could cheer a faultless round.

From the 40 starters, just seven made it through to the jump-off, a group which included three from the host country, and two in-form Rolex Testimonees, Kevin Staut and Bertram Allen. It was clear from the cheers as the domestic riders entered the arena who the home crowd was supporting.

First to go was van der Schans. The crowd hushed for the 40.51 seconds that he took to jump his second round of the competition, but that quickly changed to cheers when he went clear. He was followed by Lorenzo de Luca and Bertram Allen, both of whom had poles down. Next into the ring was favourite, Marc Houtzager, who matched van der Schans’ faultless round, but could not match his time. Van Asten followed him and was the first to go clear in a time under 40 seconds, and when the final rider had a pole down and a refusal, the Dutch rider and his home crowd could celebrate the famous victory.

Speaking after his victory, Leopold van Asten said, “It was a tough course, technical, big but it had everything in it. I changed my plan after walking the course, and my horse jumped really well. I could tell in the warm-up that he was in good shape and the first round went great. You have nothing to lose in a jump-off with seven riders, and it went well from the beginning, and I took a risk on the last and jumped it great, and that made me win today.”