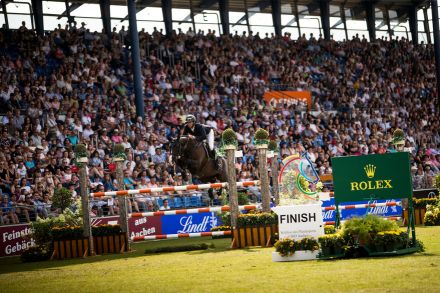 On 9 September 2018 the international equestrian community will focus its attention on the world’s top show jumpers, as they compete at the third Major of the year, the CP ‘International’, presented by Rolex at the CSIO 5* Spruce Meadows ‘Masters’. More than 87,000 spectators are expected to descend on the show and organisers are promising five days of spectacular competition.

Leopoldo Palacios, the experienced Venezuelan course designer, will set the course for the CP ‘International’, presented by Rolex, and is expected to lay down a demanding but fair challenge. Show jumping’s finest horse and rider combinations will take centre stage, all hoping to add one of the year’s most prestigious competitions to their record of top-level achievements.

Rolex Grand Slam of Show Jumping Rider Watch
With the sport’s most revered horse and rider pairings due to compete in the CP ‘International’, presented by Rolex, there are several strong contenders on target to take this Rolex Major title win.

Having impressively competed in all 17 Rolex Grand Slam of Show Jumping Majors since the initiative’s inception in 2013, Rolex Testimonee Steve Guedat (SUI) undoubtedly has the skill and firepower to ride his way to the top of the leaderboard in the CP ‘International’, presented by Rolex. The Swiss maestro jumped clear in the first two rounds of the Rolex Grand Prix at the CHIO Aachen 2018, finishing in a respectable fifth place.

Shortly after winning the Rolex Grand Prix at CHI Geneva in 2017, Kent Farrington (USA) had a fall at the Winter Equestrian Festival that resulted in a broken leg. Back in action three months later and on top form, Farrington is fresh from his victory in the Winning Round class at the Spruce Meadows CSI 5* in July and is looking to add a Rolex Major to his tally of wins in 2018. The internationally renowned athlete is consistently ranked in the top 10 in the world making him a formidable contender for the CP ‘International’, presented by Rolex title.

Rolex Testimonee and local hero, Eric Lamaze (CAN), has notched up multiple wins this year. In July he won the ATCO Queen Elizabeth II Cup at CSI 5* Spruce Meadows riding Fine Lady 5, who jumped an immaculate two rounds, recording the only double clear. Lamaze will be aiming to replicate this in the iconic International Ring where the CP ‘International’, presented by Rolex is held. With home advantage on his side and an impeccable knowledge of the arena, Lamaze is a firm favourite.

A consistently solid competitor at Spruce Meadows over the past few years is Lorenzo de Luca (ITA). De Luca and his chestnut gelding, Halifax van het Kluizebos are looking an impressive partnership after picking up multiple victories this year, including the Rolex Grand Prix of Rome at the CSIO 5* Rome Piazza Di Siena in May.

After jumping well in the Rolex Grand Prix at the CHIO Aachen in July 2018 – a title that he brilliantly won in 2017 – Gregory Wathelet (BEL) will be aiming to secure his second Rolex Grand Slam of Show Jumping Major of his career in the CP ‘International’, presented by Rolex. With a large selection of top horses to choose from and a wealth of experience of what it takes to win events at the very pinnacle of the sport, Wathelet will be in a strong position to take this Major.