And the winner is… Sameh El Dahan 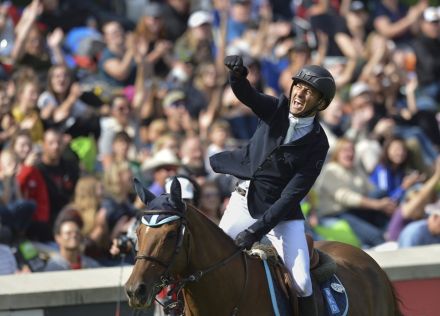 After some light mid-morning rain, the Calgary skies cleared and 38 of the world’s most talented horse and rider partnerships accepted Venezuelan course designer, Leopoldo Palacios’s challenge to jump his huge 1.70m course in the CP ‘International’, presented by Rolex.

Third in the first round’s starting order, Germany’s Andre Thieme and his 10-year-old bay gelding, Aretino 13 produced a faultless display in a time of 88.84s. However, not one of the next 30 riders to follow were able to produce a clear round, which was testament to the immensity of the contest the field was up against. It was Egypt’s Sameh El Dahan who broke the drought, piloting Suma’s Zorro, his 14-year-old mare to the second clear round of the competition. Palacios’s course continued to be ruthless, claiming the scalps of some big-name horse and rider pairings, and just five further clear rounds were recorded.

The second round proved too tough for 10 of the 12 combinations that progressed from round one, and in the end, it was just The Netherlands’ Maikel van der Vleuten and Egypt’s Sameh El Dahan, who produced double clears, and in doing so set-up a nail-biting jump-off. Van der Vleuten was first to go, going clear and setting a quick time of 42.98s. El Dahan confidently entered the tense International Ring and breezed the course, going clear and triumphing over the Dutchman in a time of 42.21s, thereby being crowned the new live contender of the Rolex Grand Slam of Show Jumping.

So Sameh, what does winning a Rolex Grand Slam of Show Jumping Majors mean to you?
“I’m delighted and absolutely over the moon. When I looked up at the big screen, because I wasn’t sure of the time, and I saw first place, it was a very difficult feeling to explain. To be a winner of one of the four prestigious Grands Prix, as part of the Rolex Grand Slam of Show Jumping is something I think every rider in the world dreams of.”

Tell us a little bit about Suma’s Zorro…
“Suma’s Zorro was bought as a foal by Joanne Sloan Allen and Sycamore Stables. When she was brought to the yard she jumped a five-bar gate when she was just six months old, so they knew they had a jumper on their hands. Joanne did an amazing job building her up until she was about seven-years-old, and then I also started riding her. Today Joanne does most of the riding, and I only jump her, so she’s done a great job.”