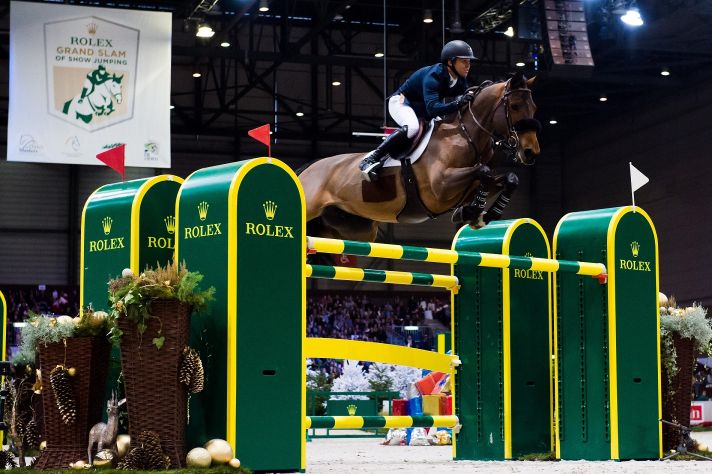 Held from 6–9 December, the 2018 edition of the CHI Geneva will include two of the pre-eminent equestrian competitions, namely the Rolex International Jumping Riders Club (IJRC) Top 10 Final and the Rolex Grand Prix, the fourth and final Major of the year in the Rolex Grand Slam of Show Jumping. The highest-ranking international riders will compete at the famous Palexpo venue, the largest indoor show jumping arena in the world.
This year’s show also features the Youth Challenge, an innovative contest introduced in 2017, giving four juniors and four young equestrians, riding four young Swiss-bred horses, the chance to compete against four of the world’s top riders, including Rolex Testimonee Jeroen Dubbeldam. In last year’s competition, the established champions had to work hard to outperform the Under-21s to win the jump-off.

Rolex Grand Prix
Geneva, a city with a strong equestrian heritage and home to Swiss watchmaker Rolex, is the ideal setting for the final Major of the Rolex Grand Slam of Show Jumping, the CHI Geneva Rolex Grand Prix. World-renowned course designers Gérard Lachat (SUI) and Louis Konickx (NED) have ensured a challenging circuit for the top horse and rider combinations.
Each of the Majors has a long tradition of sporting excellence. As a long-term partner to all four – The Dutch Masters, CHIO Aachen, the CSIO Spruce Meadows ‘Masters’, and the CHI Geneva – Rolex appreciates the significance of the Grand Slam and has been honoured to be its exclusive partner since 2013.
In contention for the Grand Slam title is Egypt’s Sameh El Dahan, who took top honours at Spruce Meadows in September. Exultant after winning the event’s CP ‘International’, presented by Rolex, the third Major of the year, El Dahan will attempt to finish his equestrian year on a high by winning a second consecutive Major at the CHI Geneva. “I’m thrilled to have won a Major in the Grand Slam and I will now be concentrating all my efforts on the CHI Geneva,” El Dahan said.

Contending Rolex Testimonees
With many Rolex Testimonees participating in the Rolex Grand Prix, El Dahan will face challenging opposition. Steve Guerdat will try for his fourth title, following wins in 2006, 2013 and 2015. The Swiss rider has been in top form this year, claiming individual bronze at the World Equestrian Games in North Carolina in September and winning the Rolex Grand Prix at CHI Royal Windsor Horse Show in May. “Competing in my home country is fantastic, and as part of the Rolex Grand Slam, the Rolex Grand Prix at the CHI Geneva is particularly significant – I will be giving it my all,” Guerdat says. Also contending will be fellow countryman Martin Fuchs, who joined the Rolex family this year and most recently earned individual silver at the World Equestrian Games.
Vying for the title will also be the defending champion Kent Farrington (USA) aiming to emulate his spectacular 2017 win at the Geneva event.
Hoping to compete in the Grand Prix will be Frenchman Kevin Staut and Scotsman Scott Brash, both of whom have claimed victory at Geneva in previous years. Looking to join the line-up will also include Rolex’s youngest Testimonee Bertram Allen (IRE), as well as fellow Testimonees Meredith Michaels-Beerbaum (GER) and Jeroen Dubbeldam (NED).