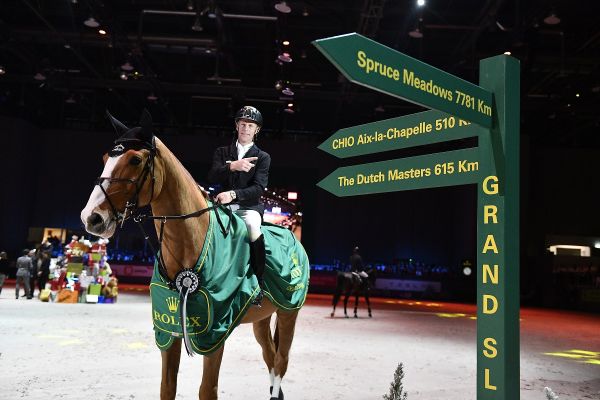 CHI Geneva welcomed 40 of the best riders in the world to compete in the most esteemed class of the show, the Rolex Grand Prix, the final Major of the year in the Rolex Grand Slam of Show Jumping.

The Rolex Grand Prix is the climax of the CHI Geneva, taking place in the infamous Palexpo arena situated in the home city of the Swiss watchmaker, Rolex. The 22-year partnership between Rolex and the CHI Geneva demonstrates Rolex’s commitment to supporting equestrian sport worldwide. Having been named the best show jumping event on nine occasions, CHI Geneva has a long and distinguished equestrian heritage and Rolex has been a proud sponsor since 1996.

Over 42,500 fans gathered over the four days for the 2018 edition of the CHI Geneva with a packed arena witnessing a thrilling two-stage Rolex Grand Prix competition between the global elite. Rolex Testimonee Scott Brash (GBR) was the first rider to go clear, later joined by his fellow equestrian Testimonees Steve Guerdat and USA’s Kent Farrington in the line-up of riders going through to the jump-off. The Swiss crowd erupted into applause as one of their home favourites, Guerdat went clear, sailing around the challenging course.

With 11 clears in the first round, the equestrian fans were enraptured as they waited for what promised to be a breath-taking jump-off, with three Rolex Testimonees, the world number one and a previous Major winner included in the line-up. Whilst all riders gave it everything, it was Marcus Ehning who prevailed with a precision performance demonstrating his exquisite horsemanship and sporting skills.

Supported by Rolex since 2013, the Rolex Grand Slam of Show Jumping is the most prestigious competition within equestrianism, requiring precision and excellence from every horse and rider partnership. All four Majors within the competition have a rich equestrian history and focus on delivering elite-level sport. This demonstration of commitment along with a passion for excellence reflect Rolex values, and make each a perfect partner for the Swiss watchmaker.

The world’s equestrian elite will now look to The Dutch Masters, the first Major of 2019, where Ehning will be travelling as the new Rolex Grand Slam of Show Jumping live contender.