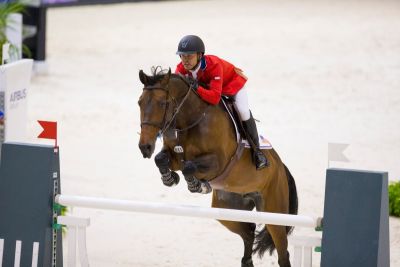 It is make or break time for the USA’s Kent Farrington at The Dutch Masters – Indoor Brabant. Farrington won the last major of the Rolex Grand Slam in Geneva and he can win the 500,000 euro bonus in ‘s Hertogenbosch. But there is more at stake for the world’s number one. When he wins The Dutch Masters’ Rolex Grand Prix, he could cash 1 million euros by winning in Aachen. Winning four majors (including Calgary) will give him an unprecedented 2 million euros bonus.

Kent Farrington began riding at the age of eight after he saw a picture of his mother on a horse and wanted to try it himself. He started taking weekly lessons at a carriage barn in downtown Chicago and soon graduated from riding carriage horses in the city to racing ponies and retraining ex-racehorses in the suburbs.

Kent spent most of his junior career catch-riding for many industry professionals.  He became an accomplished young rider, winning the Washington International Equitation Medal as well as the coveted Eiser/Pessoa National Equitation Medal Finals. Kent solidified his presence in the sport when he claimed a gold medal at the 1999 North American Young Riders International Competition at the age of eighteen.

Kent turned professional in 1999 when he accepted a job with four-time British Olympian Tim Grubb, and a few years later began working with two-time US Olympian Leslie Howard. Farrington’s transition from junior to professional was seamless; in his first three years as a professional he earned over $1 million in prize money and received the Maxine Beard Award, presented to an individual American rider who best displays true potential to represent the United States on the international stage.

Today, 37-year-old Farrington has his own successful training stable in Wellington, Florida and an impressive and long list of victories. In 2016 he won the silver team medal at the Rio de Janeiro Olympic Games and now he is facing the ultimate challenge in the Rolex Grand Slam of Show Jumping.