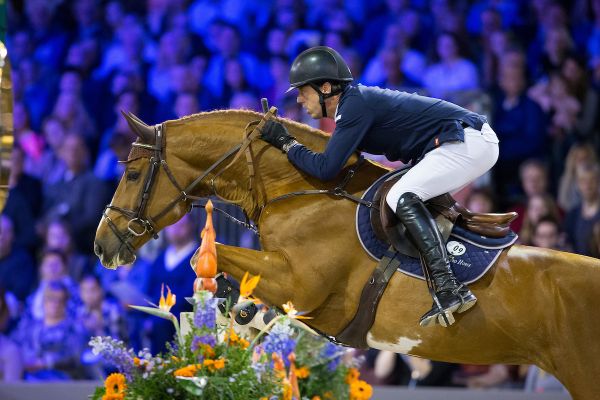 The line-up for The Dutch Masters – Indoor Brabant (8-11 March) has never looked better. Nine riders out of the world’s top 10 will compete at the Rolex Grand Slam in ‘s-Hertogenbosch.

The Dutch Masters – Indoor Brabant has made another significant step forward by joining the Rolex Grand Slam. The prizemoney for the international jumping classes has been raised to over one million euros of which 800,000 will be on offer in the Rolex Grand Prix on Sunday afternoon. The accommodation has had an upgrade as well with the newly build central entrance.

The world’s number 1, the 37-year-old American Kent Farrington, is heading the line-up. Farrington won the Rolex Grand Prix in Geneva and has started his cycle in the Rolex Grand Slam of Show Jumping. With four wins in a row (CHI Geneva, The Dutch Masters, CHIO Aachen and the Spruce Meadows Masters CSIO) he can win a bonus of no less than 2 million euros. The Rolex ambassador from Florida is preparing himself in Wellington at the Winter Equestrian Festival. In March he will travel to ’s-Hertogenbosch with his top horse, the 11-year-old Gazelle.

Two Brabant riders in the top 10
It has not happened before, but we can be proud. Currently two riders from Brabant are ranked in the top 10: Harrie Smolders, the world’s number 2, and Maikel van der Vleuten in rank 7. They too will be present in the renewed accommodation in the Brabanthallen with their best horses. Smolders had a very strong and successful season in 2017 and it looks as he is planning to do the same in 2018. Yesterday he won the Grand Prix in Bordeaux with Emerald N.O.P..

Rolex ambassadors Kevin Staut (4) from France, Eric Lamaze (9) from Canada and Switzerland’s Steve Guerdat (10) will also travel to ’s-Hertogenbosch. Recently Staut won the Rolex IJRC Top 10 Final in Genève with Reveur de Hurtebise HDC. Guerdat is the only rider in the line-up who competed in all 15 Rolex Grand Slam majors. The Dutch Masters will be the 16th performance for the 35-year-old rider from Zurich.

European Champion
The line-up is completed with two Swedish riders, Peder Fredricson (5) and Henrik Von Eckermann (8). Fredericson is the current European Champion (2017, Gothenburg) and in 2016 he won the individual silver medal at the Rio de Janeiro Olympic Games. They are joined by Italy’s Lorenzo de Luca, the world’s number 6. The 30-year-old Lorenzo is based in Belgium.

The world’s number 3, McLain Ward, is the only rider in the top 10 who cannot attend because he has other obligations.

Three days of top sport in a top ambiance are guaranteed. The Dutch Masters – Indoor Brabant is not to be missed!