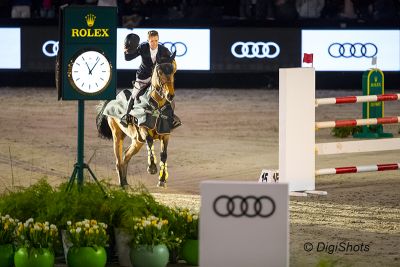 Five riders stayed clear in the initial round in the Audi Prize, the last qualification fort he Rolex Grand Prix. Johnny Pals was first to go in and had to set the time in the jump-off. He had a clear round with Chat Botte du Ruisseau Z in 36.11 seconds. Frenchman Roger-Yves Bost was not able to beat Pals’s time and also had a pole down with Sunshine du Phare. It was Maikel van der Vleuten who had a clear round and bettered the time with nearly three seconds with the 13-year-old KWPN mare Arera C (Indoctro x Voltaire). European Champion Peder Fredericson with Hansson WL and Henrik Vo Eckermann with Flotte Deerne 5 tried to keep Maikel from winning but they both had four faults.