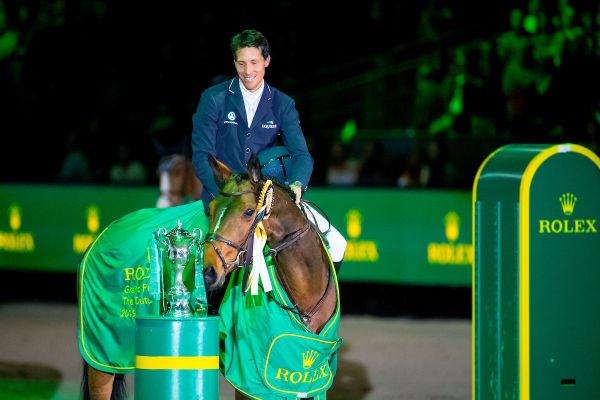 It was an afternoon of electrifying sporting drama at The Dutch Masters, with the world’s best horse and rider combinations taking to the arena in the Brabanthallen for the first Major of the year. Course Designer, Louis Koninckx laid a tough course, which saw only five reach the jump-off to battle it out for the Rolex Grand Prix title.

Rolex Testimonee, Steve Guerdat (SUI), secured the first double clear, after producing a series of thrilling turns to shave seconds off the clock. Many thought he could not be caught but it was clear from the outset that Sweden’s Henrik von Eckermann only had winning on his mind. Together with his 13-year-old bay mare, Toveks Mary Lou, the pair crossed the finish just 0.63 seconds faster than Guerdat to clinch the prestigious Rolex Grand Prix title and become the new Rolex Grand Slam live contender.

It was so close between you and Steve Guerdat, how did the jump-off feel for you?
It was great! I knew that Steve was very fast, he knocked three-seconds off Daniel’s (Deusser) time, so I thought to myself, I need to hurry up! There were only five in the jump-off, and it is nice when there are so few because then you don’t have so much competition to worry about. I just tried really hard, I wanted to win it, I gave my best effort to win it and here we are!

Toveks Mary Lou performed so well today, what is she like to ride?
She always performs so well. She is so special, it’s like she knows what is going on, she thinks ‘ok it’s Sunday today, it’s the big day I need to be the best I can be’. She always tries that little bit extra for me and it makes her a fantastic horse.

You’re the new Rolex Grand Slam live contender, is CHIO Aachen in your calendar?
Yes, it is absolutely, I really would like to go there. I am just so happy with what has happened today, and we will take it from here.

How are you going to celebrate tonight?
I have to drive the lorry home with Mary Lou in the back and I am happy for that. My girlfriend, Janika, the groom and I will head home together smiling! But the feeling I have now is amazing and that is enough, I don’t think we have to do any thing special.

Lastly, is The Dutch Masters a special show for you now?
Absolutely! I have ridden here quite a few times now and it is a fantastic event. Every year it gets better and better, they always try to make it more and more special. The atmosphere is always electric, and the crowd is always behind you.