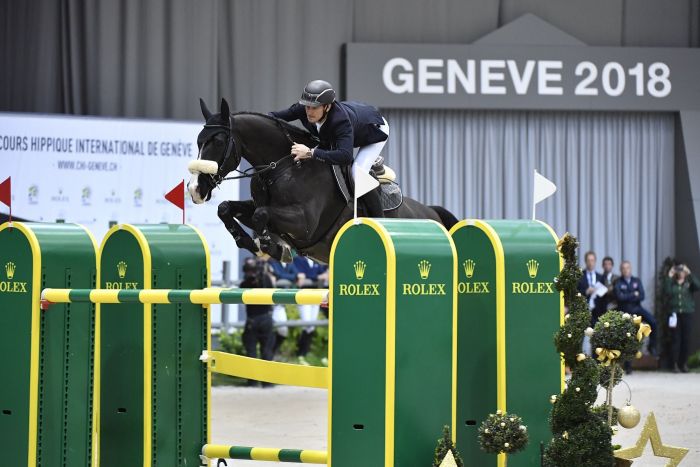 From 12–15 December, two of the most prestigious competitions on the show jumping calendar, the Rolex Grand Prix and the Rolex International Jumping Riders Club (IJRC) Top 10 Final, will take place in the Palexpo arena at the Concours Hippique International de Genève (CHIG).

Rolex Grand Prix
On Sunday 15 December, an elite field of international riders will contest the year’s final Major, the CHIG Rolex Grand Prix, which forms part of the Rolex Grand Slam of Show Jumping. They will compete on a typically imposing course created by world-renowned designers Gérard Lachat of Switzerland and Louis Konickx of The Netherlands.
A founding supporter of the Rolex Grand Slam of Show Jumping in 2013, Rolex is a partner to all four constituent Majors, each one endowed with its own unique history. The Rolex Grand Slam is arguably the most coveted prize in show jumping, awarded to the rider who wins three consecutive Grand Prix at these events. It is also one of the most challenging, requiring unparalleled displays of courage, determination and precision. Rolex Testimonee Scott Brash of Great Britain is the only person to have achieved the feat to date, starting with victory at the CHIG in 2014, followed by further triumphs at the CHIO Aachen and the CSIO Spruce Meadows ‘Masters’ in 2015.

Rolex Testimonees
After highly successful seasons, Rolex Testimonees Steve Guerdat and Martin Fuchs have both already qualified to contest in the CHIG Rolex Grand Prix. The Swiss riders currently lead the world rankings, Guerdat at No. 1, Fuchs at No. 2, and will endeavour to continue this form in front of an enthusiastic home crowd. Crowned the European champion earlier this year, and second place to Guerdat in the FEI Jumping World CupTM Finals, Fuchs will be a formidable opponent for his compatriot. Guerdat, a three-time winner of the CHIG Rolex Grand Prix (2006, 2013 and 2015), who was also victorious in the Rolex IJRC Top 10 Final in 2010 and 2018, said: “Competing in the final Major of the year is always a fantastic experience, particularly as it is hosted in my home country. Entering the arena to the eruption of support from such a patriotic crowd is a feeling like none other, and I can’t wait for the 2019 edition.”
Joining these riders will be Canada’s Eric Lamaze, in a bid to repeat his 2008 victory in Geneva. Aiming to set his sights on the top honours will be Kent Farrington of the United States, winner of the Rolex Grand Prix at the CHIO Aachen this year and the CHIG in 2017. Brash and France’s Kevin Staut, winner of the Rolex Grand Prix at the CHIG in 2010, will be joined by Rolex’s newest Testimonee, Britain’s Harry Charles as they also look to contest the Rolex Grand Prix in Geneva. Dutch rider, Jeroen Dubbeldam, former World and European champion, and Rolex’s longest-standing equestrian Testimonee, Brazilian Rodrigo Pessoa, who won the Rolex Grand Prix at the CHIG in 1993, 2000, 2002 and 2004, will be hoping to complete the strong roster of Testimonees competing.

Rolex IJRC Top 10 Final
At the Rolex IJRC Top 10 Final, the world’s top 10 riders are invited to compete against one another. This unique concept, supported by Rolex since its inauguration in 2001, acknowledges the achievements of the best show jumpers over the course of the season, and has established itself as a highlight of the equestrian calendar.
Guerdat will contest the 19th edition of the event as World No. 1 and reigning champion, having ridden his horse Alamo to victory over two faultless rounds last year. His success was the fifth in a row for Rolex Testimonees, following in the footsteps of Brash, Farrington, Lamaze and Staut. He will defend his title against fellow Testimonees Fuchs and Farrington, along with other members of show jumping’s elite group of riders.