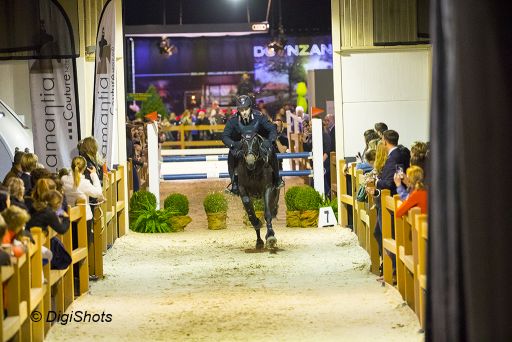 Annually the Van Schijndel Groep Indoor Derby is offers a lot of spectacle and Italy’s Emanuele Gaudiano added some more excitement. He won this competition, which course runs in two halls, for the third time in a row and with the same horse, the 10-year-old mare Carlotta 232 (by Chaccomo). An unprecedented achievement! Last rider to go he bettered the time of Switzerland’s Pius Schwizer and Balou Rubin (by Balou du Rouet) with more than 3 seconds. Ireland’s Bertram Allen finished in third place with Fairytale 86 (by Verdi TN), the horse he won the opening class with on Friday. Best Dutch rider was Piet Raijmakers Jr with Van Schijndel’s Amberlina (by Tangelo van de Zuuthoeve).