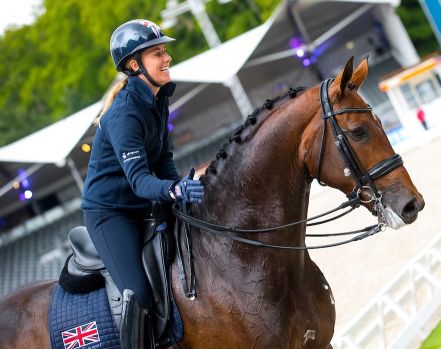 The British twofold Olympic Champion Charlotte Dujardin will compete at The Dutch Masters (12-15 March). The 34-year-old rider won the World Cup competition of London-Olympia and was runner-up in Lyon and Amsterdam with Mount St. John Freestyle and takes the fourth position in the league standings. Dujardin will be one of the most important opponents for titleholder Isabell Werth during the final in Las Vegas. The difference between the two dressage queens was minimal in Amsterdam. Charlotte won the final with her super horse Valegro in 2014 and 2015. It will be Dujardin’s debut in the Brabanthallen in ‘s-Hertogenbosch and she confirmed to bring her current top horse Mount St.. John Freestyle to compete in the World Cup competitions on Thursday evening (Grand Prix) and Saturday afternoon (Freestyle).

Dujardin will not be the only British rider to start in the Brabanthallen. She will be accompanied by Carl Hester, who is also her trainer, U25 European Champion of 2018 Charlotte Fry and Richard Davison.