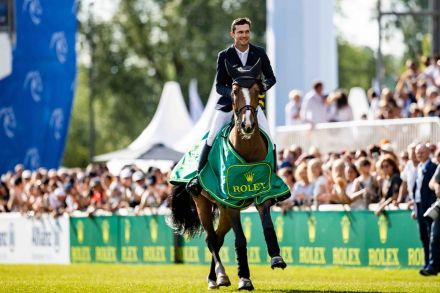 Bathed in glorious July sunshine, CHIO Aachen’s 40,000 capacity Hauptstadion looked resplendent, as it was once again the venue for the 2022 edition of the Rolex Grand Prix, part of the inimitable Rolex Grand Slam of Show Jumping. Comprising 40 starters from 14 nations, including 20 of the world’s top 30-ranked riders, the World Equestrian Festival’s knowledgeable crowd was full of anticipation, ahead of being treated to unparalleled levels of skill and precision from the horse and rider combinations that had qualified for this pinnacle class.

With just the top 18 progressing to the second round, there was little room for error, as the Frank Rothenberger-designed course – consisting of 14 obstacles and 17 efforts – demanded that each pairing was on the very top of their game. Thirteen riders eventually went clear, including on-form McLain Ward, who had his sights firmly set on a hat-trick of victories, having claimed both Wednesday’s and Friday’s showpiece classes. British trio, Harry Charles, Scott Brash and Ben Maher joined the American in round two, alongside five Germans – Gerrit Nieberg, Christian Ahlmann, Daniel Deusser, Mario Stevens and Philipp Weishaupt – much to the delight of the rapturous home crowd. Five advancing riders picked up penalties in the first round and had it all to do, including three-time Major winner, Steve Guerdat, and Harrie Smolders from The Netherlands.

After a short break, while the 12-obstacle second round course was built, two-time Major winner, Philipp Weishaupt got the contest back underway, although an early refusal by his mount Asathir meant there would be no third Major triumph for the German. Eighth to go, America’s McLain Ward and his mount HH Azur was the first combination to go double clear, much to the delight of his team watching on from Aachen’s ‘kiss and cry’ area. Next to go, the current Rolex Grand Slam of Show Jumping Live Contender, Daniel Deusser, and his super mare, Killer Queen VDM, demonstrated their unwavering talent and ability, recording the contest’s second double clear, thereby triggering a jump-off. The only rider to ever win the Rolex Grand Slam of Show Jumping, Scott Brash soon made it three in the jump-off, after he and Hello Jefferson navigated the 17-effort test fault free. It wasn’t to be for Irish duo Conor Swail and Darragh Kenny, Nayal Nasser of Egypt, Rolex Testimonee Kevin Staut and Great Britain’s Ben Maher, after they all accrued penalties. Penultimate rider to go, Nicola Philippaerts, would become the fourth to contest the jump-off, while last to go, Germany’s Gerrit Nieberg also booked his place in the final showdown.

McLain Ward kicked off proceedings in the jump-off, but was unlucky to put the final fence down. Next up, Daniel Deusser made no mistake, crossing the finishing line without a fault in 41.60 seconds, thereby setting a tough target for the final three riders to try and beat. If anyone could emulate Deusser’s time, Scott Brash could – the 36-year-old Briton going over two seconds faster than his fellow Rolex Testimonee. Despite going clear, Nicola Philippaerts’ slightly slower time saw him slot into third spot. Last to go, current world number 106, Gerrit Nieberg, produced the ride of his life abord his 11-year-old bay gelding, Ben 431, crossing the line over half a second quicker than Brash, thereby winning the 2022 edition of CHIO Aachen’s Rolex Grand Prix and in doing so becoming the new Rolex Grand Slam of Show Jumping Live Contender.

On his victory, winning rider, Gerrit Nieberg, commented: “Everything is still unreal – I really didn’t expect this. Dreams definitely came true today – it was an amazing feeling.

On the winner, second placed Scott Brash, said: “Gerrit did a fantastic round. I knew that there was an inside turn to the double and looked to it when I went in, but I didn’t fancy it and no one else had done it. He [Gerrit] had to do it to win and he did it very well, so all credit to him, and fair play. He rode very, very well and his horse jumped great today.”

On his horse, Hello Jefferson, Scott Brash, said: “I’m extremely proud of Jefferson today, he did an amazing job. I couldn’t have asked any more from him. We were beaten by Gerrit who did an unbelievable round.”