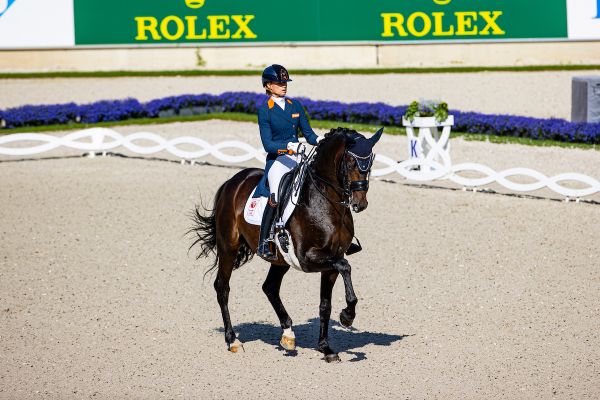 The German Olympic champion and number one in the world, Jessica von Bredow-Werndl, had already confirmed. She will bring her Olympic horse TSF Dalera BB to the Brabanthallen. Jessica who seems to be unbeatable at the moment has been at the start in 's-Hertogenbosch before. In 2017 and 2018 she was there with Zaire. "I am looking forward to coming to The Dutch Masters again. It is a super well organised event with a lot of attention to detail. For us riders and our horses the conditions are absolutely top notch!" Isabell Werth will also be at the start with the 12-year-old stallion DSP Quantaz, whom she has had under the saddle since May 2019. This son of Quaterback is called a promise for the future. Last year they managed to win the Freestyle to Music at the prestigious CDIO Aachen.

Dutch
A total of six Dutch combinations will compete in 's-Hertogenbosch, including Hans Peter Minderhoud and rising star Dinja van Liere. Dinja will start her top horse Hermès, who was recently declared KWPN Horse of the Year. The approved stallion won the Grand Prix in Aachen last year and came second in the Freestyle behind Werth. The Dutch representation further consists of Denise Nekeman, Marlies van Baalen, Madeleine Witte-Vrees and Thamar Zweistra.

The British Charlotte Fry is also competing in the Brabanthallen again and is more or less at home. She rides the horses of Van Olst Horses in Den Hout in Brabant. She brings her 14-year-old KWPN gelding Dark Legend.

In total 16 combinations from 7 countries will start. The complete overview of the participants dressage is published here.