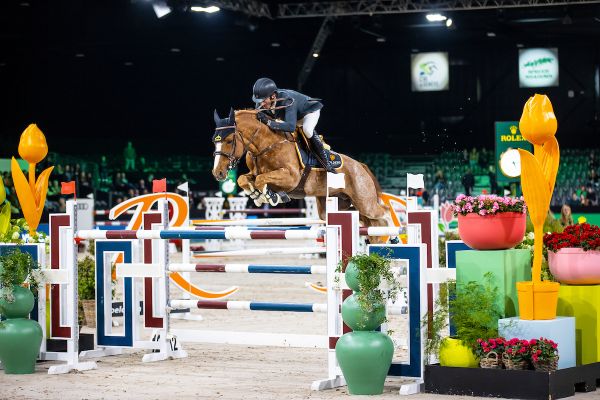 Also in the second international show jumping competition, the Gemeente ‘s-Hertogenbosch Prize, it was the Netherlands on top! Harrie Smolders rode his stallion Escape Z (ZANG, Emerald x Heartbreaker) almost 4 seconds faster in the 1m45 against the clock class than Christian Ahlmann with d'Aganix 2000 Z (ZANG, Dominator 2000 Z x Aganix du Seigneur).
Harrie Smolders afterwards: "I had to start quite early in the competition so I rode as I had planned. Escape Z is naturally very fast and everything just worked out. He will be ten years old and didn't compete much at this level yet. Which class he will jump tomorrow depends on Monaco, who will jump the big class tonight and the Rolex Grand Prix on Sunday. I am double happy with this victory because Escape Z proves he can do it and because winning in Den Bosch is always special." Maikel van der Vleuten signed for third place with the KWPN gelding Edgar (Warrant x Purioso).